March, 2011 – Working on Unbearable and trying to contain my laughter just in case people think I’m a crazy person 😉

February, 2011 – Good news! Rookery Cove: Faun of a Time is up at Changeling Press for $0.99. Can’t go wrong with that! I’m currently working on a few ideas that I’m hoping will turn into stories. I know the sequel to Bear with Me will be released later this year (I’m hoping for May), but I’m not sure about dates for anything else so stay tuned for more news!

January, 2011 – Happy New Year everyone! May 2011 be filled with happiness and good luck for you. I’m off to a good start already, as I’ve just turned in Broken Rules to my editor at MLR Press. Eager to get the edits started on that and I’m already working on my next project. I’ll have more details later!

December, 2010 – Happy December! I can’t believe the holidays are coming closer as we speak. I’m finally finished my shopping, though, so that’s a good thing. Gives me more time to sit and write instead of fighting with strangers at malls 😉 Bear With Me is now available at Changeling Press and I’m planning my writing projects for 2011. Now that I’m not volunteering as much I have a lot more time to write so stay tuned for more releases from me if everything goes as planned!

November, 2010 – I just came back from Steamcon with ideas and inspiration! Spent some time with Jet Mykles and Maura Anderson and I’m feeling pretty pumped. In other news I’ll have an early Christmas present this year with the release of Bear With Me from Changeling Press.

October, 2010 – Okay, so I’m a bad author! I’ve been seriously out of touch but that’s changing now 🙂 I’m getting closer to finishing Broken Rules, my MLR Press novel and I may even have other release news soon!

May, 2010 – I have a new release that I’m over the moon about! Bit of a surprise, really, so hope everyone enjoys the newest edition of the Pridelands. The story came out of nowhere, so I just had to sneak it in 🙂

The Brenda Novak auction is really heating up and I can’t wait to see what the final draw is. There are a lot of goodies available, so get out there and bid!

April, 2010 – Once again I’ll be participating in the Brenda Novak Diabetes Auction over the month of May. All the money raised from this event goes toward diabetes research, which is a fantastic cause (my mom’s diabetic and so are several of my relatives so this is pretty personal for me). Brenda has so far raised well over three quarters of a million dollars for diabetes research through her auction so let’s hope this year gets us over that million dollar mark!

The Fiction with Friction authors have come together to donate a wonderful basket of goodies:

I’ve also personally donated three jewelry sets for the auction. If you’re interested in those, visit http://brendanovak.auctionanything.com/ and type Jade Buchanan into the search box.

March, 2010 – I’m a couple weeks late announcing this but I recently went to New Orleans for EPICon and to spend time with my good friends Ally Blue and Jet Mykles. The three of us had many hilarious adventures before we gathered with Laura Baumbach, Lucynda Storey and Rick Reed, among others, to celebrate electronic publishing. A very good time was had by all!

February, 2010 – I’m incredibly excited to announce that the nominees for Love Romances and More Cafe “Best of 2009” awards came out today and I’ve been nominated three times!

Horsfall: As the Crow Flies also garnered a nomination for Best Cover 2009 for Bryan Keller.

January, 2010 – My schedule for 2010 is already starting to shape up and I’m very excited to have a few new releases coming out this year. I’ll also be attending a few conferences. The first one coming up is EPICon in March in New Orleans. After that I’ll be heading back to the Romance Writers of America Nationals Conference in July. This year it’ll be in Nashville. Pretty exciting!

December, 2009 – I’m very pleased to announce the release of my first audio book! Bull Rider, from the Fabulous Brits anthology, has been released from Total-E-Bound.

November, 2009 – Horsfall 3: As the Crow Flies is out now! This will be the last book for Oliver, Bayard and Marshall for the time being, although I have a feeling there might be another story or two set in the Horsfall universe 🙂

October, 2009 – I’m a bad bad girl! I missed an update in September but I have some news now. My free Halloween story has debuted at the Samhellion, and it features Cliff and Toby, my naughty werewolves from Nut Cream! Hope you all like a Sack of Nuts… Little Red Riding Hood has never looked so good…at least that’s what Cliff thinks when he sees his naughty wolf, Toby, dressed up for Halloween.

August, 2009 – The summer is going much too quickly! I can’t believe September is just around the corner. Luckily, I don’t have to worry about back to school or anything, but it does make me realize that sweater weather is nearly here again. Gotta love living in Canada! LOL! I have a few new things on my plate this month, and will thankfully have more stories coming out before the end of the year! I’m still working on Broken Rules, my very first novel length contemporary gay romance (bit of a mouthful, that is!) and I can’t wait for that to come out. I’ll also have the 3rd Horsfall novella debuting in November. That will bring to a close the story of Oliver, Bay and Marsh…for now, at least. Stay tuned for Del Fantasma: Duck Fart and a few other surprises as well!

July, 2009 – Washington was a blast! Too many stories to tell but it was great for both my own career as well as the Rainbow Romance Writers, the gay, lesbian, bisexual and transgender romance chapter of the Romance Writers of America!

June, 2009 – Time certainly flies when you’re busy, and I’ve been pretty productive this month. I will be at the Romance Writers of America National Conference in Washington, D.C. in about 2 weeks, and am really looking forward to meeting some people and getting to do a bit of sight-seeing at the same time. The first Horsfall sequel will also be released in July, along with The Storykeeper from Aspen Mountain Press. It’s going to be a great month!

May, 2009 – Wow! I can’t believe the month is almost over. This was a great month for me… I turned another year older, I participated in the Brenda Novak Diabetes Auction, I was busy busy busy with the day job and I managed to sit down a write a bit, too! I have a few new books that will be coming out later this year, including two more Horsfall books!! When I have more details, I’ll pass them on 🙂

April, 2009 – I am so happy to announce the formation of the newest Special Interest chapter within the Romance Writers of America. TheRainbow Romance Writers is the place to be for authors of romances with LGBT characters! And no, I’m not biased at all considering I’m the President 🙂

The Brenda Novak Annual Online Auction for Diabetes Research is almost here! I have a number of items available this year, and am hopeful for another great auction. Diabetes is something that deeply impacts me, as my mom is a diabetic and so are several of my other family members. The link below will take you directly to my handmade jewelry listings but I also have a few gift baskets that I’m participating in as well.

Great news!! Horsfall: Tail of Two Brothers finaled in the Passionate Plume contest!!  The formal announcements of the winners will be made at the Passionate Ink luncheon in Washington, DC during the RWA National Convention in July. Wish me luck!

March, 2009 – I have a new publisher! And three new books that will be coming out in the future 🙂 I’m completely tickled to announce that I have a new series coming out from MLR Press, a wonderful publisher that is the home of some of my best friends and favourite authors!

February, 2009 – I’m so happy to announce that the Firestorm Charity Anthology has won a Cupid and Psyche Award from The Romance Studio! This is my baby!! I have two stories inside and it really was a labor of love from start to finish. 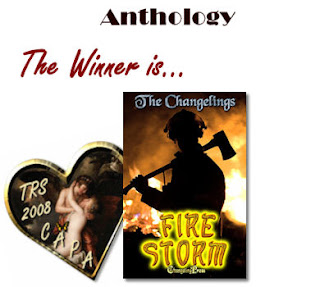 January, 2009 – I’m very pleased to announce that the Del Fantasma series at Aspen Mountain Press was chosen as the Best Series at Love Romances and More Cafe for 2008!! How cool is that??

Happy New Year! Nominations were announced over the holidays for the 6th annual Cupid and Psyche Awards from the Romance Studio (http://theromancestudio.com/capa.php) and two of my anthologies made the cut!! I’m ecstatic!

December, 2008 – I can’t wait for the holidays to arrive! I’m looking forward to the break this year. Hopefully I’ll be able to sit down and work on a schedule for 2009. This time I may even stick to it! I have a few other projects in the works so we’ll have to wait and see what 2009 brings!

October, 2008 – Where did September go?!?! It seems like just yesterday I last updated this and now I just have way too many things I’ve missed. I just came back from a fabulous trip to San Francisco where I had fun at YaoiCon with a few lovely and very talented ladies — Ally Blue, Kimberly Gardner, Laura Baumbach, JL Langley, Jet Mykles, Luisa Prieto, James Buchanan and a few more! I met up with Cheryl from Joyfully Reviewed and the wonderful Elisa Rolle who is an absolute doll in person. I even had a surprise visit with RD Solange who I last met in Portland at Epicon. I just love getting together with other writers and readers!

Here’s a bit of a slideshow of what went on…

July, 2008 – I’m in the process of switching my GI Joe pictures and stories over to my website and hope to have something new for you all soon!! Here’s what I have so far: GI Joe Pics. In the meantime, go check out my livejournal and the Operation:Write site for lots of Joe goodness 🙂

I’ve finally uploaded Stripping Conventions, the little story I wrote for the Pink Chair Diaries. It’s up in the Free Reads section for all to enjoy! It contains very adult material, read with caution!

Bull Rider will be appearing in an anthology from Total-E-Bound called Fabulous Brits. My little gay contemporary (*gasp* no paranormal in this bad boy) cowboy meets a british shy-guy story will be accompanied by wonderful stories by Willa Okati, Carol Lynne, Sedonia Guillone, JP Bowie and Jane Davitt. The anthology will be coming out in August and I’ll be giving you all more details when I get them 🙂

June, 2008 – My two offerings to the Brenda Novak Juvenile Diabetes Auction have ended and two lucky readers will be getting handcrafted necklace and earrings from me along with a copy of one of my print books. All  together, Brenda raised over $253,000!!

April, 2008 – I recently went to the Romantic Times Convention in Pittsburgh and had a great time! So great that I had to make up a little slideshow of some of my favourite memories.